My husband Scott and I are recently back from our 4th stint as docents at Pottawatomie Lighthouse in Rock Island State Park, WI. 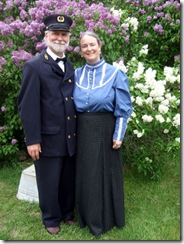 Rock Island is situated off the northern tip of Door County in Lake Michigan, and Pottawatomie is the state’s oldest light station. 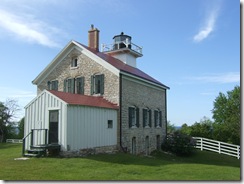 The current lighthouse, built in 1858, was magnificently restored by the Friends of Rock Island in partnership with the Wisconsin Department of Natural Resources.  It sits on top of a bluff on the northern end of Rock Island, over a mile from the boat landing and campground.  There are no roads on the island, and it takes two ferry rides to get there. 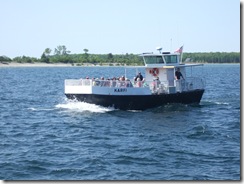 As docents, we give tours to guests from 10 AM to 4 PM each day.  Since Scott and I both love history, and telling stories, it’s a great gig.  We’re also responsible for housekeeping chores. 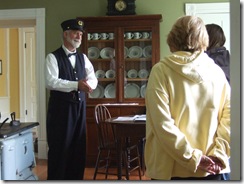 Otherwise, we get to live at the lighthouse.  How cool is that? 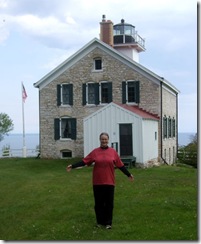 There’s no electricity or indoor plumbing.  (That’s Scott filling an Igloo at the old pump, in the rain.)  But we have a fridge and stove powered by bottled gas, and we get to sleep in the keepers’ bedroom. 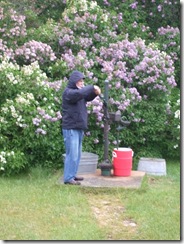 We have lots of quiet evenings.  Lots of time for an impressionable writer to ponder stories of long-gone keepers, and to imagine the lighthouse as it once was. 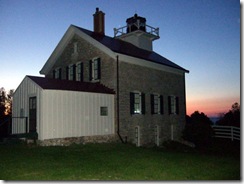 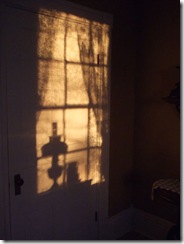 So it was pretty much inevitable that I would write a book about the lighthouse. 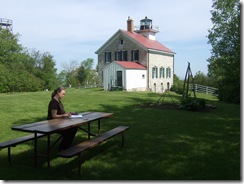 In The Light Keeper’s Legacy (coming in October), my protagonist Chloe Ellefson is invited to serve as a guest curator at Pottawatomie Lighthouse.  She’s excited about the job and eager for some solitude in such a beautiful, remote place.  Needless to say, since this is a murder mystery, her time on Rock Island isn’t quite as peaceful as she’d hoped. Writing the book let me explore some new personal issues for Chloe, who is struggling to figure out what she wants from life.  And it let me write an homage to the strong individuals who lived on Rock Island in the 19th century.  The Light Keeper referenced in the title is Emily Betts, a real  and totally awesome woman who served as Assistant Keeper at Pottawatomie.  (In the National Archives photo below, that’s Emily barely visible in the doorway.) 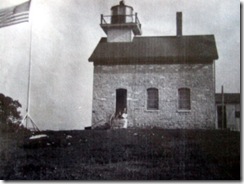 The book also showcases the complexities of managing natural resources over the years.  And it let me share a very special place with readers—some of whom will, I hope, decide to visit Rock Island and support ongoing restoration projects. 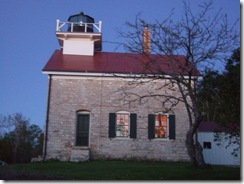 It doesn’t get much better than that.